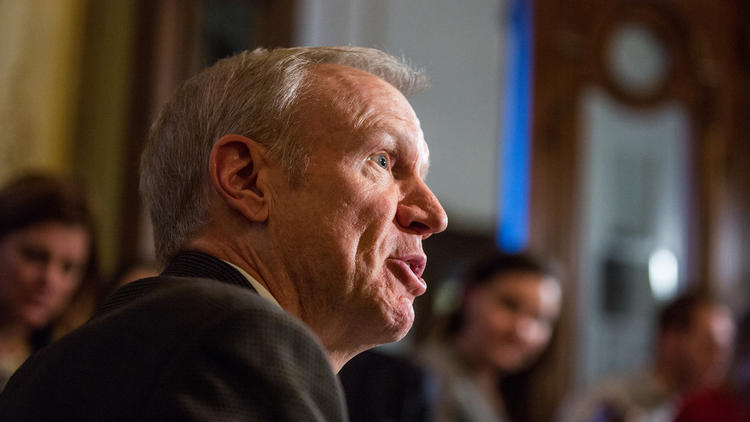 Illinois Gov. Bruce Rauner, a Republican who said he opposes medical marijuana, being sworn in has Illinois families thinking hard about their next move.

2014 was a landmark year for the acceptance of cannabidiol and medical marijuana across the US. In Kentucky, legislature unanimously passed a law last spring ushering in cannabidiol oil with legislators cheering on with excited families. This same scene has been replicated in city after city as families with their ailing children optimistically embraced each other and the elected officials that carried their cause.

When the celebrations finally end, however, a troubling trend has emerged and parents are getting anxious and frustrated with the outcome of this newly passed legislation. In Kentucky, it’s been nearly a year, and not a drop of the oil has been produced in the state. There are currently no manufacturers for the oil in the state, and it’s illegal to transport it across state lines.

Sen. Perry Clark, a Louisville Democrat and long-time advocate for the oil, said he’s been contacted by numerous constituents who can’t find the treatment they need, and whose children are still suffering while they wait.

“I’ve had several of them come to me and say ‘Where is it? Where is it?’” said Clark. “People are leaving to go to where this efficacious medicine is available to them.”

Families in Iowa are finding the same frustrations after legislation passed last May allowing for access to CBD oil. After the initial celebration ended, it slowly became apparent that there was no clear, legal way to obtain it.

“Even though they have that legal access, the means of getting it is a little more difficult than anticipated,” said director of services for the Epilepsy Foundation Monta Ponsetto.

She said for families dealing with intractable epilepsy, time is precious.

“Waiting six months maybe before the dispensaries are open in Illinois or having to go to Colorado still to obtain the cannabidiol is a long time,” she said. “That may mean dozens or hundreds of seizures between now and that time.”

Although possessing medical marijuana derived CBD oil has been legalized in Iowa for patients suffering from intractable epilepsy, the McDermott family questions the law’s usefulness.

“It gives me access to have it in my possession, but I can’t buy it here so therefore unless I go somewhere and bring it back illegally that’s the only way of doing it right now,” said Tina McDermott.

Again, in Illinois, families held on to hope that legal CBD, under the pilot medical marijuana program that began Jan. 1, would be available by now. So far it isn’t.

Gov. Pat Quinn — for reasons the Democrat has not explained — did not issue cannabis cultivation and dispensary licenses by his administration’s self-imposed Dec. 31 deadline.

With Quinn leaving office on Monday and Bruce Rauner, a Republican who said he opposes medical marijuana, being sworn in, Illinois families such as the Burkheads are thinking hard about their next move, including the prospect of moving to Colorado, where medical marijuana is legal.

“We’re running out of options,” Carolyn Burkhead said of their need for CBD, which can be mixed with olive oil and ingested through the mouth, or can be added to baked goods such as brownies, or delivered to patients through pills, lotions, or vaporizers.

“My husband and I have really good employment here with really fantastic medical benefits,” she said. “And we’re hesitant to pull the plugs on our entire support structure and move out to Colorado as so many people have had to do.”

Families of patients in need of medical marijuana, as well as entrepreneurs hoping to get on the ground floor of a new industry, expressed disappointment and frustration that Quinn apparently will turn the issue of medical marijuana licenses over to Rauner.

Families are left in limbo and their children need treatment now. Quinn’s failure to issue the promised cultivation and dispensary licenses will tarnish his legacy, said Carolyn Burkhead, the mother of Mira, the 3-year-old with epilepsy. Unfortunately, this is not a unique situation in the US, and families are finding themselves fighting for access to cannabidiol for the second time.