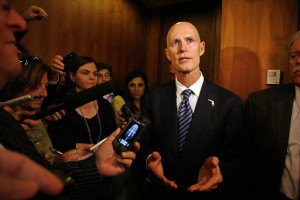 Gov. Rick Scott signed Senate Bill 1030, which approves the CBD medication, nicknamed Charlotte’s Web, and SB 1700, which protects the identities of the patients who use it.

Last year, Gov. Rick Scott signed a bill that legalizes the use of a noneuphoric, high CBD strain of marijuana to treat conditions such as epilepsy, Lou Gehrig’s disease, and cancer. He signed Senate Bill 1030, which approves the high CBD medication, nicknamed Charlotte’s Web, and SB 1700, which protects the identities of the patients who use it. This was seen as a huge victory and step forward for the state of Florida. However, there has yet to be a single patient helped by the legislation so far.

This has been yet another example of a state where they have allowed the use of CBD, but have created no means by which patients can legally acquire it.

In Georgia, Gov. Nathan Deal and Rep. Allen Peake were hit with the frustration of citizens last week concerning House Bill 1, the medical marijuana bill. Deal, instead of allowing marijuana production in the state, has decided to form a commission that would be charged with figuring out the best way to manufacture and distribute medicinal marijuana.

That kicks the can of production down the road for a year.

Peake could have gone to the mat and challenged the governor, getting House Bill 1 passed in the General Assembly and forcing the governor’s veto. It’s a fight he might have won.

While it essentially would be legal to possess the medicine in the state, how would families and others procure it? On the surface it means families that have had to split up — one parent living in Colorado where their child can legally be treated — would get no relief. Federal law seems to prevent shipping the drug across state lines, but there is more under the surface, a riptide if you will.

While the delay, as Peake said, “is painful,” the earliest manufacturing could have begun, even if legal, would have been the end of this year.

But there are options that can help sufferers. Peake is working with a Colorado marijuana manufacturer who has agreed to ship a high CBD product to Georgia as soon as the immunity bill is law. There is also the option of purchasing CBD from retailers who source from hemp, which makes it legally available throughout the United States.

Despite these setbacks, there is still legislation and commitment from governmental agencies to push CBD and medical marijuana forward in 2015.

In Iowa, State Rep. John Forbes, D-Urbandale, has highlighted his commitment to cannabidiol. He states:

“In general, I am looking forward to working hard on issues that will strengthen the middle class, generate good-paying jobs for all Iowans, and support K-12 education. I am also following up on a commitment we made last year to ensure that Iowans with severe epilepsy have access to cannabidiol, a substance that may relieve their symptoms.”

Here are some of the bills and proposed bills on medical marijuana before the 2015 Montana Legislature:

• House Bill 173 by Rep. David “Doc” Moore, R-Missoula, to prohibit state agencies from making rules concerning the sale of marijuana if it’s legalized, except for the sale of medical marijuana. Moore said if voters decide to legalize marijuana, it should be the Legislature that writes the rules, not state agencies. Hearing set for House Judiciary Committee on Jan. 23.

Bill drafts not introduced yet:

• LC0087, by Rep. Ellie Hill, D-Missoula, to generally revise medical marijuana laws. Hill said her bill would be to codify, or put on the law books, a recent ruling by District Judge James Reynolds. She said it’s a placeholder bill, or one with a broad title that can be used later for a more specific measure.

• LC0606, by Sen. Robyn Driscoll, D-Billings, to generally revise medical marijuana laws and change state law to incorporate Reynolds’ decision. She is working with the Montana Cannabis Information Association on the bill.

• LC0084, by Rep. Nicholas Schwaderer, R-Superior, to authorize the manufacture, sale, and use of cannabidiol, which is non-psychotropic and can be used for certain medical treatments. He said he’s not sure he will introduce the bill.

• LC0778, by Rep. Rae Peppers, D-Lame Deer, to add post-traumatic stress disorder to the list of conditions for which medical marijuana may be recommended for treatment.

• LC1193, by Sen. Mary Caferro, D-Helena, to generally revise marijuana laws. She said she likely will put in a bill to decriminalize the possession of small amounts of marijuana, but would like to legalize pot.

• LC1266 and LC1267, by Rep. Pat Noonan, D-Ramsay, to generally revise medical marijuana laws and to regulate the industry. Noonan said these are placeholders.

• LC2124, by Rep. Jeff Essmann, R-Billings, to generally revise medical marijuana laws. He said it’s a placeholder bill. He said he would be meeting with a bipartisan group of legislators to see if they can come up with a bill.

• LC1944, by Sen. David Howard, R-Park City, to make illegal in Montana any drugs listed in Schedule I of the Federal Controlled Substances Act. The bill would have the effect of banning medical marijuana in Montana because marijuana is listed on the federal schedule. Howard is working with SafeMontana, which failed last spring to get enough signatures to put the same proposal on the ballot.