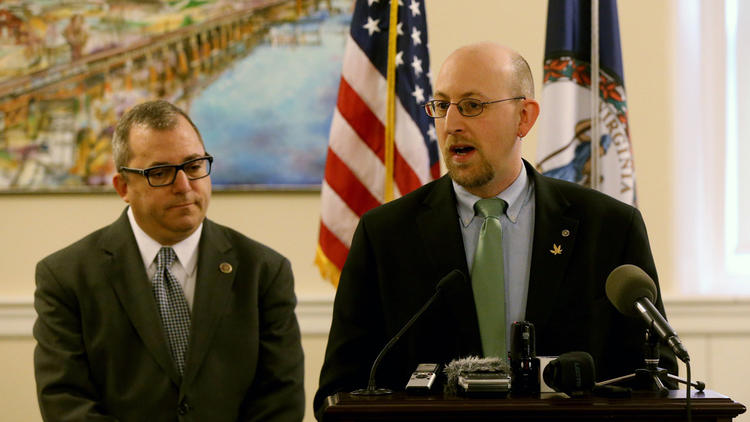 Lawmakers in Virginia are joining the growing movement to address the state’s outdated marijuana laws.

Sen. Adam Ebbin, an Alexandria Democrat, has introduced a bill that would eliminate jail time for possession of marijuana and make it punishable by a maximum $100 civil penalty.

At an emotional committee hearing Thursday, four mothers of epileptic children pleaded for this bill’s passage. They said their children have suffered serious side effects from taking legal epilepsy drugs, including depression, rage, weight gain, and suicidal thoughts.

One child, 14-year-old Haley Smith of White Stone, suffered a seizure in her wheelchair during the hearing.

“This is normal for me, this is daily for me,” said Lisa Smith, Haley’s mother.

Sen. Ebbin said Thursday at a news conference that criminalization of marijuana not only has failed to reduce use of the drug, but has had harmful effects on society.

“It makes criminals out of regular, nonviolent citizens,” he said. “It financially burdens our commonwealth to the tune of $67 million a year in law enforcement costs.”

Ebbin also cited racial disparities in enforcement of the law. The American Civil Liberties Union, which supports the bill, says African Americans are 2.8 more times likely to be arrested for marijuana possession than whites, even though they use the drug at roughly equal rates.

The measure faces an uphill battle. The House of Delegates has routinely killed decriminalization bills in the past.

Beth Collins of Fairfax County said she and her daughter Jennifer have been living in Colorado for the past year, apart from the rest of their family, in order to obtain THC-A oil legally.

“Throw away your misconceptions,” she said. “This is not a political issue. This is a health issue.”

In Houston,  Elizabeth DeLuca and other moms across the country have taken up the fight to be able to access cannabidiol in their home state without having to make such severe sacrifices.

“The chemical in marijuana that does not produce the high,” DeLuca said. “That has been removed.   And then it’s mixed with oil and then the oil is administered to the child either orally or through their feeding tube.” While this is available legally in CBD sourced from hemp, there is the need for more readily available information and acceptance of cannabidiol as a medical alternative.

DeLuca said she and others plan to flood the White House with cards asking for the first lady’s help getting the president’s support.  DeLuca explained, “Ours’ says #cannabisismedicinetexas.  And then on Feb. 5, we are all going to mail out those cards.   And then on or about Feb. 9, Michelle Obama will be receiving a deluge of just thousands and thousands of postcards from children and young adults from across the country.”

DeLuca said her daughter Caroline, who is suffering from a disorder that causes catastrophic epilepsy, can no longer walk or swallow. Her mom wants to give her the best life possible.  But she says she needs help from the federal government to make it legal in Texas and other states.  “She would just love to have a few seizure-free days, (that) would be great,” said DeLuca.