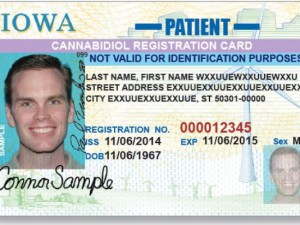 The Iowa Legislature passed, and Gov. Terry Branstad signed, a bill permitting individuals with intractable epilepsy and their caregivers legal use and possession of cannabidiol.

On Monday, Iowans suffering from chronic epilepsy were able to apply for a medical cannabidiol registration card. These cards provide documentation that patients and primary caregivers have met the requirements of the Medical Cannabidiol Act and are authorized to legally possess medically necessary cannabidiol.

The law allows only for the oil’s usage and does not permit the product to be produced in Iowa, which advocates told The Gazette-Lee Des Moines Bureau in November can cause a problem because similar programs in other states do not recognize out-of-state patients.

Advocates added that if an Iowa resident does obtain the oil, he or she risks breaking laws in other states while transporting it back to Iowa.

Looking to capitalize on the momentum and push for more progress, the Iowa chapter of the National Organization for the Reform of Marijuana Laws, or NORML, met with Iowa City community members for its first community and membership meeting last Sunday.

Crystal Brunt, director of communication for Iowa NORML, said the meeting was intended as a way for the organization and its members to introduce themselves to the Iowa City and Cedar Rapids communities and to see if there is an interest in creating satellite chapters in those areas.

“We’re moving on forming a hemp bill, and we’re trying for full-out legalization,” Brunt said. “What we’re trying to do here today is to reach out to people, inform them and spur activity.”

Members of the Des Moines-based Iowa NORML spoke to the community during the meeting about the bill that was signed into law last year by Gov. Terry Branstad that legalized the possession and use of marijuana oil, or cannabidiol, for patients with intractable epilepsy. The families who lobbied for that law, however, have said the law is basically useless because it provides no legal means to obtain the marijuana extract. Entrepreneurs have recently entered into the medical marijuana community to provide legal access to cannabidiol in all 50 states, but they are just gaining the attention of the community.

“The war on drugs has been an abysmal failure. It rips apart families and destroys young peoples’ lives over a matter of personal choice,” Brunt said. “We’re pushing for more sensible policy that would treat possession and use as a heath issue, not a criminal issue.”

Further support in the state comes from Dr. Charuta Joshi, one of the University of Iowa’s top expert on childhood epilepsy. She plans to sign letters of support for families who believe cannabis oil will help their family, but warns them to beware of possible risks and false optimism.

Dr. Joshi said previous anti-seizure drugs have also caused great excitement and optimism, but then were found to cause unexpected side effects, including liver damage.

Although she urges caution, Dr. Joshi believes that cannabidiol could help reduce seizures in some patients.

An overview of Iowa’s Medical Cannabidiol Act can be found here.