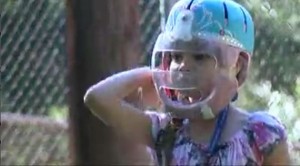 Six-year-old Aarilynne Paradise is one of the patients who will be part of the clinical trials which will begin early next year at the Medical University of South Carolina.

SUMMERVILLE, SC (WCSC) –A small group of young patients will make history in South Carolina, testing a CBD extract, or a form of medical marijuana. CBD stands for Cannabidiol.

The clinical trials will involve children with Dravet Syndrome, a rare form of epilepsy. Six-year-old Aarilynne is one of those patients who will be part of the clinical trials which will begin early next year at the Medical University of South Carolina.

“We can’t let her run too much because she’ll get too hot and it will start a seizure,” said her mother, Christina Paradise, who carefully watches her three daughters play on a sunny afternoon in Azalea Park in Summerville. If Aarilynne gets overheated, it could trigger a seizure which could be dangerously prolonged. If the seizure lasts more than ten minutes, the family says they must rush Aarilynne to the emergency room. “In the past week and a half, she already had five severe seizures, two of which required her to go to the hospital,” Paradise said.

“Are you okay?” she asks Aarilynne, who weakly replies, “No.” Paradise and her husband wrap Aarilynne’s neck with a cooling towel, which allows her to continue tossing balls with her sisters. A colorful helmet also protects Aarilynne’s head in the event she should fall.

“She’s already had almost 3,500 grand mal seizures,” Paradise said, “and she is only six.”

This family is eager to find a treatment that will work. “Aarilynne is out of options,” says Paradise, worriedly. She explains they’ve tried countless therapies, simply to find they may work for a short time, or not at all.

“I’m really hoping this is going to be her answer because we don’t really have any where else to go,” she says about the clinical trials that will test a CBD extract, a form of medical marijuana which does not produce a high. Dr. Jonathan Halford of MUSC is overseeing the clinical trials for GW Parmaceuticals. The study here will involve five to ten children with Dravet Syndrome.

Dr. Halford tells us, the company’s preliminary study found the CBD extract worked to reduce seizures in some children with this rare form of epilepsy. “We don’t know exactly how it works, but we know that in about half of the patients who have tried this drug, half had an 80 percent or greater reduction in their seizures, so quite a benefit,” he explains.

Paradise is aware clinical trials mean some children won’t get the actual drug. Still she sees it as a step forward. This mom is hoping the clinical trials will eventually lead to FDA approval, which would mean access to the drug. “It’s just exciting to be able to know that there may be something that can help my daughter,” she said.

If you have a child with Dravet Syndrome and want more information about the clinical trials, you can contact the research assistant at MUSC. Call 792-3855.

Read More About Research At The Medical University Of South Carolina