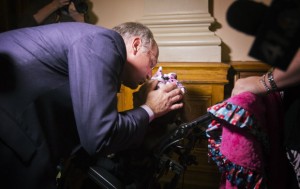 ATLANTA — Halfway through a months-long series of hearings on medical marijuana in Georgia, Macon’s chief Republican lawmaker says he’s starting to get clearer ideas on a road map to therapeutic cannabis in Georgia — and who would be able to take it.

Among other things, it would require in-state cannabis growth in facilities as secure as a jail, state Rep. Allen Peake said.

Georgia’s sheriffs are looking closely at security, investors are looking at how to make money selling something that’s illegal under federal law to a limited number of people, and doctors will be tapped to decide which ailments would merit a medical cannabis card.

But it’s time to move forward on the proposal, at least Georgia resident says.

“We need growing, we need cultivation” in Georgia, said Monroe County mom Janea Cox. Her 5-year-old daughter, Haleigh, has severe seizures. The two are living temporarily in Colorado, where Haleigh can take a liquid medicine derived from cannabis.

“We recently had eight seizure-free days, which was completely amazing,” Cox said.

Now that her brain is no longer being reset hundreds of times daily and she’s in therapy, Haleigh is building muscles — and smarts.

Dad Brian Cox is still back in Georgia to keep his job.

“It’s heartbreaking to think we’re going to miss Thanksgiving and Christmas” at home, Cox said. “I hope to be home in April. I’m so homesick right now.”

But right now, she can’t legally bring Haleigh’s medicine to Georgia. Federal law prohibits cannabis and all its products. The Justice Department has told Colorado and Washington that their state-regulated marijuana programs won’t be a priority for federal law enforcement as long as they keep the cannabis in their own states.

Peake very nearly passed a bill earlier this year that would have decriminalized Georgia possession of cannabidiol, or CBD oil, the medicine that Haleigh takes. It’s an extract from a cannabis plant and does not cause a high.

“There’s a lot we don’t know” about CBD, said Mike Van Dyke, chief of toxicology at the Colorado Department of Public Health, though it is known to act on part of the brain and how it transmits messages. His department is about to distribute $10 million in grants on medical cannabis research. The evidence on seizure relief from CBD is small and anecdotal, he said, but it appears to cause about the same or fewer side effects compared to traditional pharmaceutical offerings.

Peake’s otherwise popular bill on CBD became a casualty of a bit of political brinkmanship over another measure.

Right after the session ended this year, he and several friends and colleagues started the Journey of Hope fund to pay moving expenses and rent for Georgia families to take their children who have severe seizures to Colorado or California for medical cannabis treatment.

They’ve raised and spent about $100,000 on 10 families, including that of one little girl who died in September.

“My hope is that by next spring, we won’t need the Journey of Hope fund,” said Peake, meaning that he aims to pass a bill in the first few months of 2015.

The first part of it, he said, would decriminalize possession of liquid medicine like Haleigh’s that’s been legally obtained in another state, so that her family and others like them won’t risk arrest if they come home.

Second, it would lay out the legal landscape for a medical cannabis infrastructure starting with growing, through manufacture to retail. Oversight might be based in the Department of Revenue, said Peake, right beside alcohol and tobacco.

There would be just a handful of licenses for each step in the process, he said, “so that law enforcement doesn’t have to go all over the state looking for different facilities.”

Law enforcement will insist on the right to look, said Terry Norris, executive director of the Georgia Sheriffs’ Association.

The sheriffs think in-state grow is a bad idea though, he said. “You don’t cultivate poppy in the state for codeine.”

The biggest reason they’re skeptical of cultivation is what Norris called the “slippery slope” that appears to exist in other states that leads from medical marijuana to the recreational kind.

Peake said, “I am in lock step with them. I don’t want to go down that slippery slope.” He said the state Legislature is not in favor of any liberalization, and he would fight it as long as he’s in office.

Norris said he does not expect huge official opposition as long as the bill bans smoking cannabis, that there are safeguards against diversion into the black market and that the measure allows local law enforcement agencies to inspect the operations and the process at any time without a warrant.

The typical site in other states is a closed industrial building mostly tended remotely, guarded with laser trip wires and accessible only by thumbprint, said Jake Bergmann, CEO of Surterra Holdings, an Atlanta company that invests in innovative agriculture projects.

His company sees a demand for CBD oil, but it is awaiting the rules around supply.

“A business infrastructure needs to be created to supply this need,” Bergmann said.

By his math, it would cost $60 million to $70 million in investment to build a safe, secure, adequate supply chain, all the way down to unmarked SUVs with armed guards to transport the liquid.

Patients would use between one-half and three plants a year depending on the strength of their dose, Bergmann said. That would cost patients something like $200 to $500 per month, if they can afford it, or at cost for needy families. Insurance doesn’t cover it.

Thus, CBD in Georgia would be a viable investment for private capital, Bergmann thinks, if it’s allowed at least for seizures, glaucoma and cancer.

The list of diagnoses that medical cannabis would be allowed for is still in flux. Laws in Minnesota and New York and a draft in Missouri are among Peake’s templates. All three name fewer than a dozen. All of them include HIV/AIDS, cancer and epilepsy.

Conditions from arthritis to post-traumatic stress syndrome have their partisans, and research is sparse.

Rather than fight over each one in the state Legislature, Peake’s bill would also create a medical board in charge of advising lawmakers on adding or deleting disorders from the cannabis-eligible list. It would also be charged with registering and approving doctors who could issue a medical cannabis card. That board would probably also take on the hot debate over THC, the psychoactive ingredient in cannabis.

“I know it freaks everybody out, but we need THC,” Janea Cox said. Only when doctors added a little nightly THC to Haleigh’s CBD regimen did she experience her first seizure-free day in years.

The bill to be published by January will define some maximum THC content, and it will be too low to cause a high.

The next hearing on medical marijuana is scheduled for Wednesday at Georgia Regents University in Augusta, where medical professionals will give their opinions.

Read More About CBD In Georgia