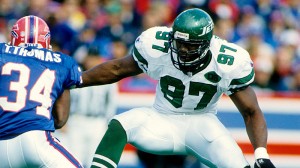 Since spending 11 years crashing helmets in the NFL, Marvin Washington has become an outspoken advocate for medical marijuana. “How many players are using it? 75 to 80%,” the former defensive told attendees at the East Coast Cannabis Business Expo in New York on Oct. 12. “But 100 % of NFL players are on pharmaceuticals.”

Washington, who played for the Jets, 49ers and Broncos during his football career (he won Super Bowl XXXIII with Denver in 1998), is spokesperson and advisory board member for KannaLife Sciences, which has come under scrutiny after a Project CBD report highlighted a variety of wild investment deals, possible product standard problems and questionable research claims involving cannabidiol sellers.

But Washington wasn’t at the Expo to talk CBD. The NFL’s drug policy was foremost on his mind. Because of the nature of the sport and the frequency of pain, injuries and head trauma, he called on the league to “lead the science on this (medical marijuana). Players are using it for anxiety and stress.”

After retiring from the gridiron in 1999, Washington became a financial consultant whose clients include active NFL and NBA players. “The NFL is not a contact sport. It’s a collision sport. The guys that smoke marijuana, they don’t like what the pharmaceuticals do to you. Marijuana is healthier and less addictive” than opiate drugs, he said.

“We still have to care for players,” Washington went on. “So many had CTE (a degenerative brain condition following multiple concussions), dementia or Alzheimer’s. You can’t have ex-players walking around with all these issues, including killing themselves.”

Washington also brought up the possibility that forms of medical cannabis should be available right on the field. “There should be something that lessens the effects of the nausea, impaired vision and protects the brain,” following a head injury, he stated. Recent scientific research backs this claim.

Washington concluded with a clear call to action: “The NFL has to lead the science with their funds and resources. We are at the right place and time for cannabis to be looked at as a solution, not a problem.”

In an interview with JetNation.com in September, Washington said, “People have to realize that the CBD has no psychoactive effects, which means you’re not getting high, but it coats the brain and acts as a neuro-protector… I do not smoke marijuana myself, and the only reason I’m behind this is because the CBD does not have the psychoactive effect. So, if it can help the players, I’m all for it.”