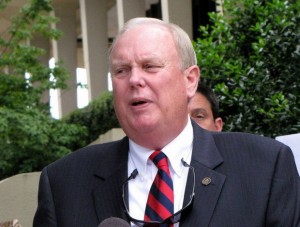 There is cannabidiol, a drug derived from plants in the marijuana family that can have broad medicinal use. There is marijuana, an illegal drug used recreationally, the use of which can be a felony.

“It’s apples and oranges. Our people are smarter than that,” State Rep. Jim Patterson said of any confusion between the two. “They can see the difference in somebody having a medical use (and recreational). We have to separate the two.”

It gave UAB’s Department of Neurology the ability to prescribe the drug for seizure disorders. The law reads it “shall be provided exclusively by the UAB Department for a debilitating epileptic condition.”

The recent story about Itamar Shapira of Huntsville, who suffers from a debilitating colon condition, brought CBD oil back to the forefront. He maintains that if he had access to the drug, it would provide relief.  However, it may not be prescribed for his ailment.

While Carly’s Law was perhaps a first step toward broader use, it was a tenuous one. It was controversial because CBD is a marijuana derivative.

Politicians “were afraid of that, for being seen in Alabama as pro-marijuana,” said Patterson, who noted that “in an election year … some people were threatening to make it a campaign issue.”

However, Ball’s relentless work on the bill – “the most courageous thing I’ve seen in Montgomery,” Patterson said – made Carly’s Law a non-partisan issue.  It passed unanimously in the House and Senate.

“They (Ball and Sanford) did their homework well to get that through, because most people were like me. They said ‘hey were not going to vote for any kind of marijuana bill,'” said Rep. Howard Sanderford. “But when they said UAB was going to be the one controlling this thing and making sure it works, a lot of people signed on.”

“I’ve never seen anything turn around and us work together more than Carly’s Law,” Patterson said. “It’s a model for how we should operate.”