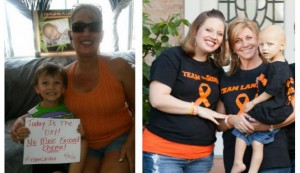 The maintenance chemotherapy was extremely rough on Landon, his mother said. After nine months, Landon’s mother and doctors noticed he was actually getting worse.

“Landon was in a small percent that do that bad with chemotherapy. … (The doctors) were not taking Landon into consideration. It even got to the point that they wanted to increase one of his medications, solely so they could see the toxic side effects for themselves,” Sierra told The Cannabist. That’s when Sierra, who was opposed to marijuana use, was willing to consider giving her son cannabis oil to make sure his Leukemia stayed in remission.

“Unfortunately, he got sicker and sicker and sicker,” Wendy, Landon’s grandmother, said as quoted by The Cannabist. “He went for six weeks without eating. I mean, we were getting to the point where he was dying. You know at that point you really becoming willing to look at anything.”

Riddle told CNN that she found the Stanley brothers in Colorado. They offered a cross-bred cannabis plant that had less THC and more cannabidiol (CBD). CBD, according to CNN, is believed to have “analgesic, anti-inflammatory and anti-tumor activity without the psychoactive effect.”

“As soon as we started doing the oil, his platelets have been above normal for a cancer patient. They’ve been at a regular healthy person’s level and they can’t understand why,” Landon’s mother told CNN over a year ago. According to CNN, this effect is the what most intrigues cancer researchers about cannabis.