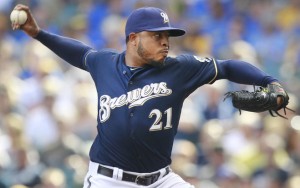 Jeremy Jeffress could have walked into anything. Insincere smiles. Dubious glances. Cold shoulders.

Instead, the first time he opened the clubhouse door at Miller Park, he saw an old friend from Class A, Jonathan Lucroy, and the guys at the card table. Their warm welcome gave him a sense of belonging.

“It was like I’m back home,” he said. “You know how a soldier comes home? Or when you come home from a long trip? It just felt good.”

Every guy has a story about how he made it to the bigs.

Jeffress’ story is how he made it back.

The Milwaukee Brewers’ relief pitcher has juvenile epilepsy and used marijuana, he says, to try to treat his symptoms. It almost cost him his career as a pitcher.

Researchers are studying whether and/or how marijuana helps those with epilepsy. One hypothesis, according to Nathan Fountain, director of FE Dreifuss Comprehensive Epilepsy Program, states that cannabidiol, one of the nonpsychoactive compounds found in marijuana, might help stop seizures associated with the condition, but that theory remains unproved.