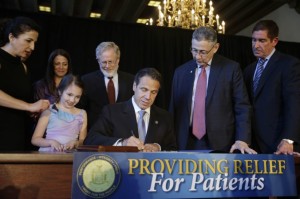 State Acting Health Commissioner Howard Zucker has written to Holder’s office twice in the past six weeks, asking for permission to bring the drug across state lines. The state in June passed a law authorizing medical marijuana, but its system won’t be up and running until January 2016.

“As members of Congress whose constituents suffer from these illnesses, we feel that the federal government ought to do what it can to help these children,” the senators wrote. “Therefore, we are requesting that you provide the state of New York with a waiver that would prohibit federal prosecution for the importation of cannabidol in the rare cases where medical marijuana is imported between two states with legalized medical marijuana, and the amount is small, finite and prescription-based.”

The waiver request is believed to be a long shot.

Emily Pierce, a spokeswoman for the U.S. Department of Justice, said the department was unaware of any similar requests made by any other states.

“I can tell you that we’ve received (the waiver request) and we are reviewing it,” Pierce said.

Marijuana possession is illegal on the federal level, but prosecutors haven’t intervened in states where the drug has been legalized for medical or recreational purposes, as long as it hasn’t been transported across state lines.

The waiver, Zucker wrote, would only allow the state to distribute the drug to young children suffering from epileptic seizures and would only be needed until the state launches its own medical-marijuana program in January 2016. Advocates say certain marijuana-based oils and pills have shown signs of helping epilepsy patients.

“This is an extremely important issue to us, and it will help many children and young adults,” Zucker wrote last week in a letter to Deputy Attorney General James Cole. “As a pediatrician myself, I cannot urge you enough to consider this exception to the present law as we all only want the best for these young patients.”

Read More About The Push For CBD In New York Here