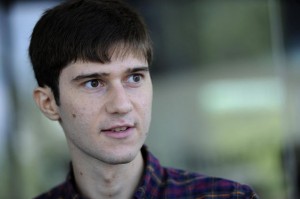 Now 21, he struggles to climb a few stairs.

A recent graduate of Vanderbilt University, Shapira is facing surgery to remove his colon.

He began feeling run down last year and was diagnosed in January with ulcerative colitis, an excruciatingly painful intestinal disorder that produces so many ulcers in the colon that the body cannot properly absorb food.

“I went from a healthy, athletic individual to screaming in the bathroom,” Shapira said.

Faced with a debilitating illness, the biomedical engineering graduate turned his research skills to his own case.

Shapira found a substance Cannabidiol, or CBD oil, that promises significant relief and possible healing of the lining of his colon. The same substance has been identified by a number of Alabama families whose children suffer from epilepsy and terrible seizures. Those children are poised to get relief through CBD oil.  He just can’t have it.

[The parents behind Alabama’s CBD law want to see Congress take a stand on the same issue.]

The problem is CBD comes from the cannabis plant, which is better known as the source of marijuana. The Food and Drug Administration still classifies marijuana as a schedule 1 drug – having no medical value – in the same category as heroin, LSD and ecstasy.

After Itamar learned about CBD, he went to his pediatrician, the only doctor he’d ever had. She did some checking and found CBD appeared very promising, but there was no way to get a prescription.

“It’s not quite clear why it is not being explored in the U.S. other than the stigma attached to it with marijuana,” said Huntsville pediatrician Dr. Rebecca Cochran. “I’m concerned we’re missing out helping people because of the word cannabis.  It’s not a psychotropic drug.”

Cochran said it’s sadly ironic that Shapira is battling over medicine, since he’s always been strongly opposed to using it.

“He was a very healthy kid,” said Cochran. “He would come in with an illness and I’d tell him, ‘We need to use this medicine’ and he’d say ‘I don’t want to put that in my body.’ Even when he had poison ivy, he said he’d ride it out. He doesn’t like medicine and he’s a very pure person in terms of his health.

“He would be last person on earth to smoke pot.”

CBD oil is derived from another variety of cannabis plant, which is used for making hemp. You cannot get high from CBD oil because it has no psychoactive properties. Hemp plants are high in CBD and very low in THC, the substance that makes a marijuana smoker high. Marijuana plants are high in THC, low in CBD.