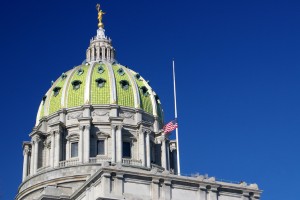 Debates over medical marijuana continue in the PA General Assembly

As the debate continues over medical marijuana around the country, yet another state senator has filed legislation in favor of legalizing marijuana. Sen. Curt Thompson (D-Tucker) filed the bill, along with a constitutional amendment, that would legalize marijuana for recreational use in Georgia. This would also allow retailers to sell no more than 2 ounces of marijuana to anyone 21 years and older.

“It would set up a system of recreational marijuana that would include the medicinal… so that there would be one format that would address everything,” he says.

A tax charged on the sale would be divided between education and transportation but taxes would not be charged on marijuana for medical purposes.

The constitutional amendment would require a two-thirds majority to pass in both the House and Senate before it could go to the voters.

Thompson realizes it may be a long shot this year, but says he wouldn’t have proposed it if he didn’t think it could happen.

Rep. Allen Peake (R-Macon), who is proposing a bill to grant immunity to those with nine medical conditions who bring cannabis oil in from other states where it’s legal, has said he would fight just as hard any attempt at legalizing recreational marijuana.  His sentiments are shared by leadership in both the House and Senate and Gov. Nathan Deal as well.

A similar bill was filed by Senator Daylin Leach in the Pennsylvania state senate. Sen. Leach explained “Our foolish, ill-conceived, costly and destructive policy must end. That is why I will shortly be introducing legislation removing the possession, use, and regulated sale of Marijuana from the purview of our state’s criminal justice system. This bill will legalize the consumption of marijuana for adults over the age of twenty one, without regard to the purpose of that consumption.”

Over the past few years, 19 states have legalized medicinal marijuana. Some states have very strict regimes, in others, such as California, this has resulted in de facto legalization. This past November, two additional states, Washington and Colorado, voted to legalize marijuana. Pennsylvania looks to be the next in line for ending a policy that has been destructive, costly, and anti-scientific.