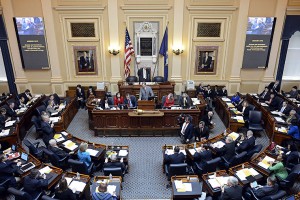 In Oklahoma, State lawmakers passed a bill Wednesday that would allow children with epilepsy to use cannabis oil that contains less than 0.3% THC.

It was passed in yet another majority, with the house agreeing that doctors should be able to prescribe CBD oil without the psychoactive components.

Gov. Fallin as well as the Oklahoma Bureau of Narcotics (OBN) supports this bill.

“This is not the legalization of medical marijuana. It’s simply taking the particular chemicals in it and putting it in a medical form,” Mark Woodward, with the OBN, said.

The bill will now go to the Senate. If the Senate agrees, it will go to Governor Mary Fallin. If she signs the bill, “Katie’s Law” will take effect immediately.

It’s not quite the Age of Aquarius. More like “the CBD epoch,” as staff at NORML refer to the phenomenon.

“In the course of one legislative session, some of the most conservative states have embraced this notion of CBD access,” St. Pierre said. “We never could have predicted it, and we’re currently vexed by it.”