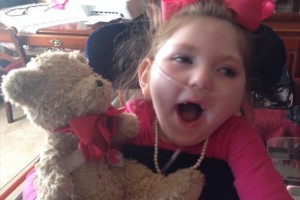 A Forsyth, Georgia mother says her daughter’s health is improving every day since they moved to Colorado to start medical treatment that is illegal in the Peach State.

Janea Cox tells 41NBC cannabis oil is giving Haleigh a second chance at life and she will do whatever it takes to help her child. Even if that means leaving her husband and family behind until Georgia lawmakers pass a bill that can bring them home.

Inside a Colorado Springs home, Janea heard her five-year-old daughter say ‘mama’ for the first time.

“I cried really, really hard because we’ve always been told that she would never talk, walk, or sit on her own, do anything,” Janea said. “She’s changing right before our eyes and it’s amazing.”

In March, Janea made the tough decision to leave her husband behind in Forsyth and move almost 1,500 miles to Colorado with Haleigh so she could start her cannabis oil treatment.

“It’s been hard on our family,” Janea said. “It puts a strain on you financially and emotionally.”

Janea says the move is worth it. Before Haleigh started taking the medicine, she was having more than 200 seizures a day. She has now gone eight seizure free days in a row, thanks to the treatment she receives five times a day.

“She’s become more alert, she smiles all the time, which we never used to see her smile.”

But that smile and all of Haleigh’s huge health improvements come with a price.

“Haleigh can’t come back home. We’ve been banned from Georgia since we started this medicine,” Janea said.

A state lawmaker, who calls himself an unlikely champion, is trying to fix that.

“It hit me that if this was my granddaughter, if this was my daughter, I would move heaven and earth to pass legislation to provide access to medicine that would help her,” State Representative Allen Peake (R-District 141) said.

After a medical cannabis bill failed during this past legislative session, Peake is making it his mission to bring Haleigh and other medical refugees who left Georgia seeking treatment back home.

“Let’s come up with a better bill, learn from other states and come up with the best piece of medical cannabis legislation that we can, maybe the best one in the country,” Peake said.

Peake’s proposed bill would legalize an oil form of medical marijuana high in CBD, which is a medicinal property of the plant, and low in THC, so the patient can’t get high. The medical cannabis oil would be taken in an oral form.

It would be a heavily regulated and restrictive system with tight security, including 24 hour cameras at the facilities, background checks for employees, and 24 hour access to the facilities for law enforcement. There would be a limited number of licensed growers, processors, and distributors of the oil in Georgia. Peake says lawmakers are considering the Georgia Department of Revenue to be in charge of the licensing because it already has a process in place for alcohol and an enforcement arm for compliance with that licensure process.

Peake adds, there would be increased criminal and civil penalties for violations by licensees and for drug trafficking.

“We want to make sure we are sending a clear message that we are not becoming the state of Colorado,” Peake said. “We are not opening Georgia up to a black market of marijuana.”

Law enforcement says, if lawmakers can help these families then they should, as long as this doesn’t lead the state down a slippery slope.

“We want to make sure it’s correct and it doesn’t get to lead to the recreational use of marijuana. We are 100% opposed to that,” Decatur County Sheriff and President of the Georgia Sheriff’s Association Wiley Griffin said.

Peake says that won’t happen. The lawmaker adds this bill could benefit patients with all kinds of serious medical conditions. The proposed bill says the patient would have to meet a qualified condition, including:

•    seizures (including those characteristic of epilepsy)

•    severe and persistent muscle spasms (including those characteristic of multiple sclerosis)

•    terminal illness with a probable life expectancy of under one year if the illness or its treatment causes severe or chronic pain, severe vomiting, or severe wasting.

“While it was initially geared to children with seizure disorders, if it’s a part of the plant that is not going to cause any psychoactive effect on an individual then we ought to allow it to be all citizens have access to it,” Peake said.

Peake says you would get a red card, similar to the ones patients use in Colorado, and take it to a distributor to buy the oil. The red card would show that you are registered with the state as a medical cannabis patient. The dispensary will also be able to match your information in an online system to make sure you are eligible to receive cannabis oil. Peake says the oil could cost you up to $400 per month and that is not covered by insurance.

“We want to provide a safe, effective, and timely medicine to people that need it.”

If the bill passes, you won’t see marijuana warehouses and shops right away.

“Once that happens, they’ll have to set up a regulatory scheme, so that takes months to do,” Jason Cranford with theFlowering HOPE Foundation said.

Cranford is from Warner Robins and is joining the fight to legalize medical marijuana. He moved to Colorado five years ago to research and study cannabis oil. He created a strain called “Haleigh’s Hope” and says he’s seeing great results.

“Sometimes it makes me cry because it’s like witnessing a miracle,” Cranford said. “These parents are at the end of their rope and then when they see a child turn around like this and think that there is hope, it’s really touching.”

For now, Janea keeps Georgia on her mind and hope alive, until the family is reunited.

“We’ll stay out in Colorado till Georgia does the right thing for us,” she said.

Peake plans to introduce the bill during the first week of the new legislative session that starts in January. He hopes the House of Representatives and Senate can pass the bill and get it to Governor Nathan Deal’s desk by March 1st.

Once singed, there would be an immediate immunity for families who left the state seeking treatment to come home. It is still against federal law to transport marijuana across state lines. Peake says those families are taking a risk.

The lawmakers hopes those who would benefit from cannabis oil could have access to it by the end of 2015.

A big question brought up during this medical marijuana debate is what are the long term side effects of using cannabis oil? According to Cranford, as far as researchers and experts can tell, there are none. He tells 41NBC they are currently conducting studies in Colorado and hope to have more information in the next year.

A documentary called, Growing Hope, is premiering Thursday night in Dallas, GA. It showcases Georgia’s fight to legalize cannabis oil. Peake says plans are in the works to add a few more showings across the state. Click here to learn more about the documentary.

Hear from Beth Harris, the president of the Georgia Christian Coalition, and it’s stance on legalizing medical marijuana in Georgia in the video player.